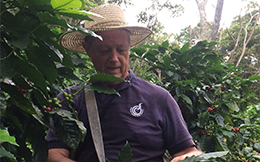 Damian has planned and piloted an impressive coffee project in the highlands of Barreta, Coclé in Panama which started in 2008. It was something he has wanted to do since he saw how the major national coffee company abused that community back in 1994.

Take a look at his YouTube series “Panama Coffee: Putting Barreta on the Map”.

Back in Canada, he bought a Barbecue Coffee Drum Roaster and began his education in coffee. In 2008 the Reed’s returned to Panama. He then put into action his plan to open up a brand new Specialty Coffee Region in an extremely isolated part of Panama.

After 12 years and counting, the project continues and Damian’s hands-on knowledge and experience have also advanced. He now has ample experience, knowledge and relationships in everything coffee from the farm to the roaster.

“The JUMP” – Introduction to the JUMP Conference

Damian will provide an introduction to the JUMP Conference. He will dive into the rationale behind bringing coffee producers and consumers together to share their insights through this forum. He will also touch on the urgency to mobilize the coffee industry after COVID-19.

“There are no problems, only solutions.”  – John Lennon. Introduction Coffee producing communities have always faced challenges. Unfortunately, new challenges have arisen due to COVID-19. Producers must find solutions quickly or risk going out of business this year. Panel Questions We will learn about the COVID-19 challenges and problems faced by small farmers face in […]